Gaming for One: Designing Solo Modes with David Digby 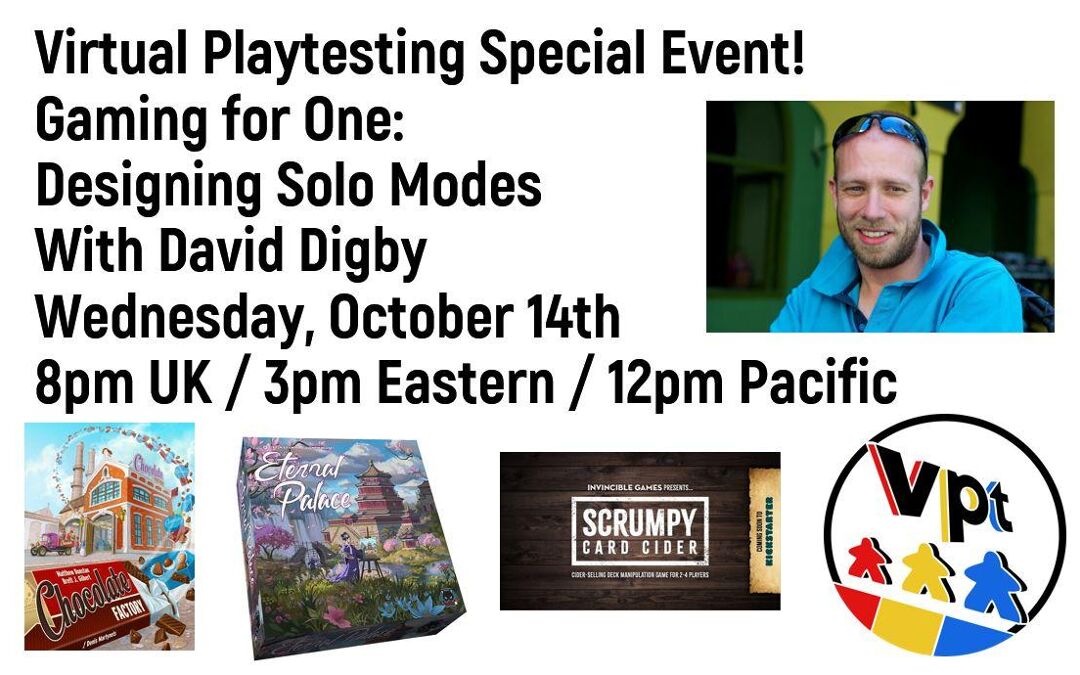 David Digby is a game designer out of England. He has 1 published solo design in Chocolate Factory and 2 fan-made designs on BGG for Concordia and Reavers of Midgard. He’s a developer behind Tinner’s Trail (a Martin Wallace reprint). He’s designed plenty more that’s coming your way soon – he’s designed solo modes for games on Kickstarter now (Swatch) or coming to Kickstarter in the future (Scrumpy: Card Cider, Eternal Palace, Fantastic Quests, and Undaunted).

1:06 – Introduction
2:53 – How did you get started making solo modes for games?
5:35 – Why do people play games solo?
7:29 – What does ‘player interactivity’ look like in a solo mode? How do you handle ‘trading’ and other things like that?
9:45 – When is an AI bot to compete against the best fit, and when does a simple “score x points/achieve y goal in a time limit” work better?
16:16 – Beat your own high score much maligned – why?
18:44 – How do you ensure that solo games are replayable? If a player wins once, what’s the incentive for them to play again?
23:24 – How to get the right balance between a solo game being too simple that it hurts the replay ability of the game against a game that requires too much micro management that takes you away from actually having fun playing the game?
29:07 – What’s the best way to know if you should develop resources to making your game solo playable?
33:56 – How many decisions should the player be making on behalf of the AI?
35:18 – What do you think are the mechanics most suited to solo games? What separates them from mechanics that are good for multiplayer games but don’t suit solo games?
38:28 – What challenges do you find making a solo variant on a strategy game that has no randomization? For clarification something like Hive.
42:03 – What is your experience with playtesting solo games / modes? does it take longer as you are only getting one person’s feedback at a time, or do you try to entice more spectators during your playtesting?
47:17 – How do you add a solo mode to a game without adding too many extra components just for that mode? Do you have any strategies or formats you use to keep this extra component cost down?
53:15 – Do you have a max play time for a solo mode design that you’d never want to go above? (How long is too long for a solo game?)
57:05 – As a publisher with a limited total budget for development of the game and for a solo mode, to what extent can you justify spending that on solo mode development rather than development of the game as a whole?