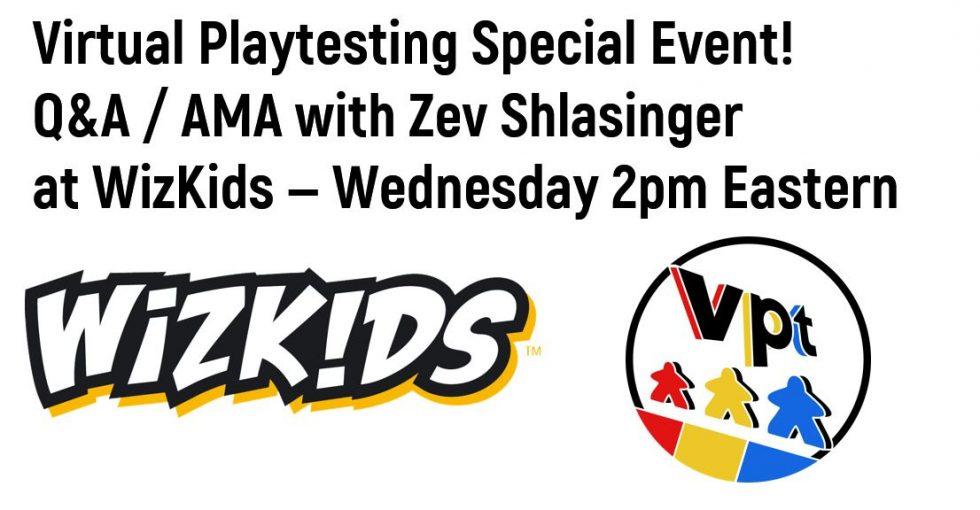 Had a great time chatting with Zev Shlasinger, the Head of Board Game Operations of WizKids and the ‘Z’ behind Z-Man Games. He joined us for a Q&A / AMA (Redditspeak for Ask Me Anything) session, where he answered a ton of questions relating to publishing.

1:39 – Since WizKids works quite a bit with licensed properties, I’d like to learn more about that side of things. It’s always seemed like a chicken/egg dilemma to me: Do their games get designed with a particular IP in mind, or are they developed first and later considered for being a licensed game?
4:17 – With no physical conventions, what are the best ways of unpublished designers to get in touch with publishers?
7:02 – How would someone contact you / the Wizkids team if they have a game to show you?
8:45 – In current situation the amount of real life social interactions has drastically decreased in a development process. Such as attending conventions and what not. What are the substitutes?
11:44 – Are there any types of games you see as growing in the next few years? Similarly, any types of games where the market seems oversaturated?
13:24 – Solo modes seem increasingly popular on Kickstarter games. For games publishers outside Kickstarter, how much importance is placed on solo modes?
15:52 – Could you name 3 games that came out last your that you wish Wizkids had published?
18:43 – When deciding if you will publish a game, how important is it for the game to bring a new unique mechanism?
20:00 – Given the evolving dynamics in tabletop publishing and distribution during the pandemic, do you see any shift in the considerations a designer might think about when deciding whether to go with a publisher versus self-publish via Kickstarter?
22:34 – Do publishers get “scared” of designs that are maybe “too developed”, that already have bunch of art, detailed rule book, has been playtested a lot and so on…. Is there a general rule of thumb on those or are you open to anything and does the approach change in that case?
25:45 – Do you ever work to license Already/Previously Launched games on Kickstarter? Does a previously Kickstarted game have a potential “second life” to a publisher?
27:28 – Is it alright to pitch a game with a license in mind, or is that the kiss of death—particularly if it would be a license the publisher doesn’t currently have?
29:04 – If you had to guess based on your personal knowledge, how much of a board game’s cost would go back to the IP holder?
30:27 – Have any of your games ended up completely different than when they started, and what did you learn in the process?
31:41 – As folks move to put their prototypes online through platforms to playtest, some have just started finishing them up and then selling them there. Do you think this will encourage designers to forgo publishers and print, to just go ahead and do an online digital version?
34:35 – What should be on a sell sheet, and how does a sell sheet sell your game?
37:27 – How ‘shiny’ does the prototype need to be to pitch? If you were to see a prototype that was hand-written and in sleeves, would you consider that?
39:30 – What is the first thing you want to hear in a pitch? What is something you never want to hear in a pitch?
42:44 – Of the games that have been pitched to you and then were published, on average how complete were the prototypes that were presented to you / how much development did they need before they were released?
45:00 – Does the lack of a solo mode hurt a pitch?
45:48 – Does there seem to be a market for games that use anime licenses or aesthetics? Looking from the outside it seems like an underserved market.
48:10 – How important is theme marketability when pitching?
49:41 – What are the pros and cons on developing a game from scratch with an in house team, as opposed to picking up an (almost complete) game from a designer, or even putting a call out to multiple designers (with a specific brief in mind)?
51:33 – Regarding selling / marketing, what are you using as your tools to market games today?
53:30 – To what degree should a pitch mention expandability? How/When does a publisher decide things like “waves” or “expansion packs”?
54:44 – On average, how long does it take to release a game from the time of signing?
56:15 – How much research do you do in the designer themselves before signing a game?
57:16 – In a showdown between yourself and Mr. Zee Garcia, who is the more important ‘Z’ in board games?